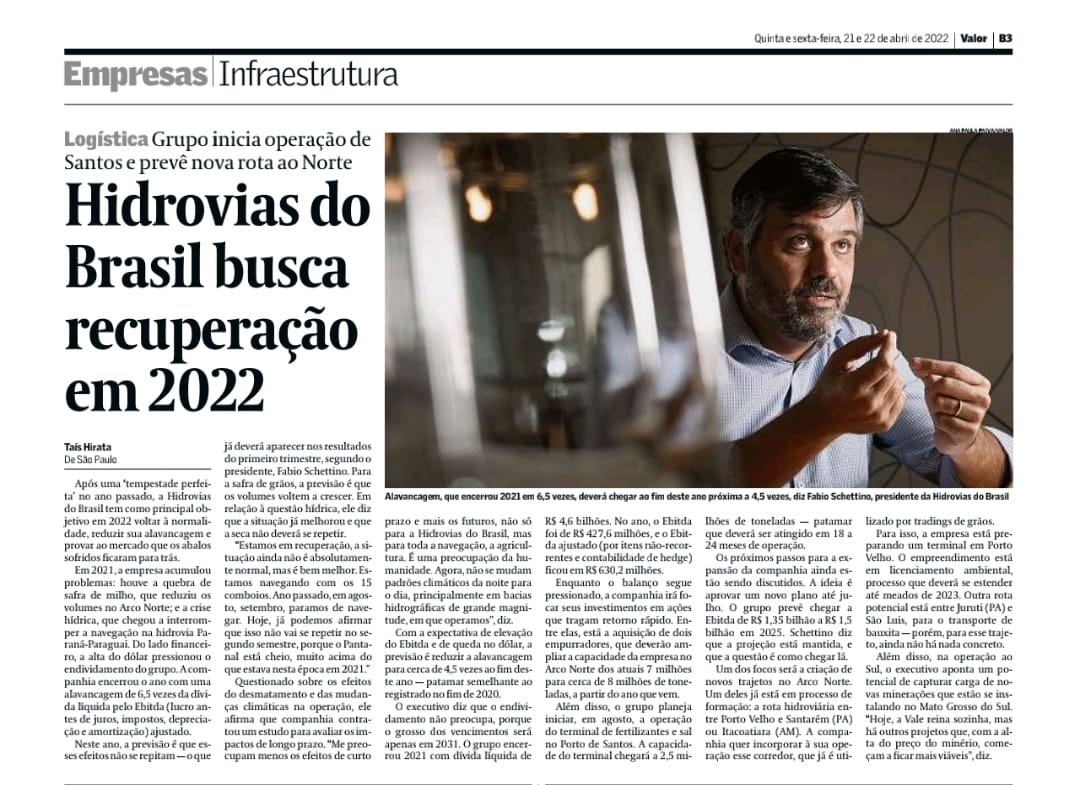 After a 'perfect storm' last year, Hidrovias do Brasil's main objective is to return to normality in 2022, reduce its leverage and prove to the market that the shocks suffered are behind us.

In 2021, the company accumulated problems: there was a break in the corn crop, which reduced volumes in Arco Norte; and the water crisis, which came to interrupt navigation on the Paraná-Paraguay waterway. On the financial side, the rise in the dollar put pressure on the group's indebtedness. The company ended the year with a leverage of 6.5 times of net debt by adjusted Ebitda (earnings before interest, taxes, depreciation and amortization).

“We are in recovery, the situation is still not absolutely normal, but it is much better. We are sailing with the 15 convoys. Last year, in August, September, we stopped sailing. Today, we can already say that this will not happen again in the second half of the year, because the Pantanal is full, much higher than it was at this time in 2021.”

Asked about the effects of deforestation and climate change on the operation, he says the company hired a study to assess the long-term impacts. “I'm less concerned about the short-term effects and more about the future, not only for Hidrovias do Brasil, but for all navigation, agriculture. It is a concern of humanity. Now, weather patterns don't change overnight, especially in large-scale hydrographic basins where we operate,” he says.

With the expectation of an increase in Ebitda and a fall in the dollar, the forecast is to reduce leverage to about 4.5 times by the end of this year – a level similar to that recorded at the end of 2020.

The executive says that indebtedness is not a concern, because the bulk of maturities will only be in 2031. The group ended 2021 with a net debt of R$ 4.6 billion. In the year, Ebitda was R$ 427.6 million, and adjusted Ebitda (by non-recurring items and hedge accounting) was R$ 630.2 million.

While the balance sheet remains under pressure, the company will focus its investments on stocks that bring a quick return. Among them is the acquisition of two tugboats, which should expand the company's capacity in Arco Norte from the current 7 million to around 8 million tons, starting next year.

In addition, the group plans to start operating the fertilizer and salt terminal in the Port of Santos in August. The terminal's capacity will reach 2.5 million tons – a level that should be reached in 18 to 24 months of operation.

The next steps for the company's expansion are still being discussed. The idea is to approve a new plan by July. The group expects to reach Ebitda from R$ 1.35 billion to R$ 1.5 billion in 2025. Schettino says that the projection is maintained, and that the question is how to get there.

One of the focuses will be the creation of new routes in Arco Norte. One of them is already in the process of formation: the waterway route between Porto Velho and Santarém (PA) or Itacoatiara (AM). The company wants to incorporate this corridor into its operation, which is already used by grain trading companies.

For this, the company is preparing a terminal in Porto Velho. The project is under environmental licensing, a process that should last until mid-2023. Another potential route is between Juruti (PA) and São Luis, for the transport of bauxite – however, for this route, there is still nothing concrete.

In addition, in the southern operation, the executive points out a potential to capture cargo from new mining companies that are being installed in Mato Grosso do Sul. “Today, Vale reigns alone, but there are other projects that, with the rise in ore prices, are starting to become more viable”, he says.